With respect to West Point Grey Residents Association’s views on the City’s proposal to convert the Jericho Hostel to a shelter for the homeless, please see below.

Please be advised that there is a flyer currently circulating that WPGRA did not authorize or approve for content, but has used the WPGRA name and logo and some information from the website and email. The flyer does not accurately reflect our views and we were not aware of it until it was distributed.

UPDATE – Nov. 22, 2020 – WPGRA has recently had contact from the City, both individual councillors and the Mayor’s Office with referrals to lead senior staff. We are hoping to get more information from the City and to have the community involved in a meaningful process. Please see a recent letter HERE.

City Council has identified the Jericho Hostel in West Point Grey’s Locarno Beach Park as a potential homeless shelter for relocation of Strathcona Park homeless camp when it does not meet the Council approved criteria.

However, Part A3 of the Motion simultaneously identifies the Jericho Hostel as one of two prospective shelters to be “pursued”.

Another valid concern is that there are no services for the homeless in the area. No food, supports, or transit. The homeless legitimately have very high social service needs that are not available.

See the map below that shows the Jericho Hostel clearly doesn’t meet the criteria.

WPGRA has written 3 letters to Council and Park Board: See links below.

The following are points to consider:

Submit comments by copying or attaching a pdf through the City’s online form so that staff count it HERE. 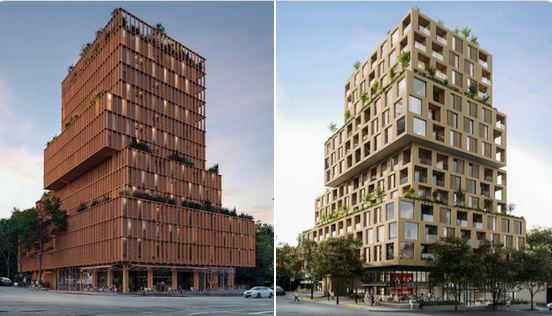 The rezoning application has only changed from the left to the right. Nothing meaningful.

For the final record of correspondence see HERE and Oct. 29 Agenda HERE

Our concerns were generally as follows:

On April 14, City Council will consider changes to the meeting schedule that would have Public Hearings proceed during the the COVID-19 pandemic. These would be electronic virtual Public Hearings, the first of their kind, and inconsistent with the requirements under the Vancouver Charter.

WPGRA has sent a letter to Council on the matter here.

The general text in the letter is as follows:

The West Point Grey Residents Association acknowledges the need for special powers to permit the City to respond effectively to the COVID-19 emergency.  We understand that City Council meetings are currently being convened electronically  to enable appropriate physical distancing.  However, in the absence of open and unfettered public participation, as envisioned through the Vancouver Charter, we are concerned that the scope of these meetings could stray too far beyond this emergency.

We draw your attention to the Coalition of Vancouver Neighbourhoods’ letter to you dated April 5, 2020 expressing such concerns.   We share these concerns.

Regarding the City’s proposal to proceed now with Public Hearings having no connection to the COVID-19 emergency, we urge Council not to approve the Public Hearing date changes as proposed in the April 14 agenda, item 1, for the first electronic Public Hearing to be May 5. Instead, please cancel all Public Hearings until after May 31, or when the Provincial restrictions on public assembly are lifted to allow for full public participation as required under the Vancouver Charter.

The City is asking for comments on a new rental rezoning policy for apartment buildings that allows 6 storeys in C2 zones,
5 or 6 storeys on arterials and 4 storeys on side streets.

For WPG that is on:

Comments will be received from the city until tomorrow Friday April 3, 2020.

Note: WPGRA has asked for an extension on the deadline for comments to the City past April 3 since the city has yet to answer our questions in our letter as linked below and the challenges of COVID-19, but we encourage people to still send in comments of their concerns and to mention need for extension and answers to WPGRA questions.

a.) Read letter from WPGRA to City here

c.) Send your comments to the City through the online form in the link above, and

This rezoning would set a huge precedent for West Point Grey & Kitsilano.

2. Send an email to the City. See Below

3. Donations: Please donate on PayPal Donate button to the right.

(Note: if the petition asks for donations that goes to change.org, not to WPGRA.)

See the WPGRA Letter to City on Alma – Broadway for more information.

The City has received an application to rezone 3701-3743 West Broadway from RS-1 (single family dwelling) and C-2 (Commercial District) to CD-1 (Comprehensive Development) to allow for the development of a 14-storey mixed-use building including:

General Concern: The current rezoning application of 172 ft., 14 storeys (effectively equivalent to 17 storeys), and 5.3 FSR is not appropriate for this site. Instead, the previous 2015 rezoning application (that is now on hold) for 100 % secured rental housing in a 6 storey building on this site should be reconsidered.

Recent precedents along West Broadway (e.g. the 6 storey Parthenon building at Balaclava Street) for secured rental developments are a good model for a neighbourly scale and design, with appropriate setbacks for wide sidewalks and outdoor seating.

Send emails to the City: A short email, even if just a line or two, makes a difference.

Please describe your concerns, that should start with if you are opposed or support the project and any further points. It can be any length from one line to as long as you choose.

See the WPGRA Letter to City on Alma – Broadway for more information. 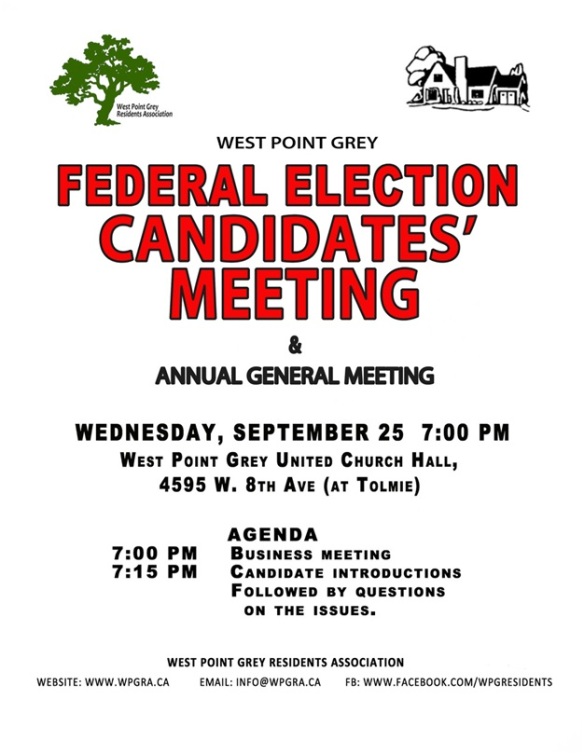 Community Meeting on the

Community organized meeting to inform on the issues

WPGRA sends a letter to Council regarding subway extension to UBC 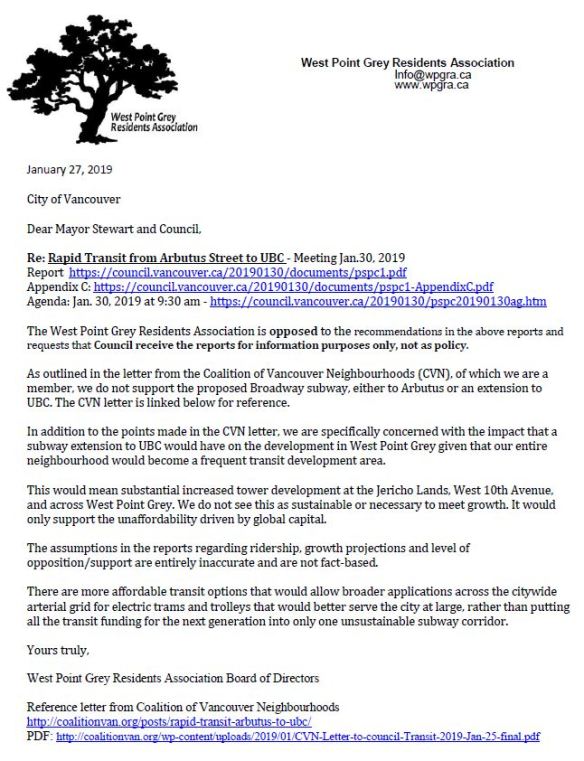 The West Point Grey Residents Association is opposed to the recommendations in the above reports and requests that Council receive the reports for information purposes only, not as policy.

As outlined in the letter from the Coalition of Vancouver Neighbourhoods (CVN), of which we are a member, we do not support the proposed Broadway subway, either to Arbutus or an extension to UBC. The CVN letter is linked below for reference.

In addition to the points made in the CVN letter, we are specifically concerned with the impact that a subway extension to UBC would have on the development in West Point Grey given that our entire neighbourhood would become a frequent transit development area.

This would mean substantial increased tower development at the Jericho Lands, West 10th Avenue, and across West Point Grey. We do not see this as sustainable or necessary to meet growth. It would only support the unaffordability driven by global capital.

The assumptions in the reports regarding ridership, growth projections and level of opposition/support are entirely inaccurate and are not fact-based.

There are more affordable transit options that would allow broader applications across the citywide arterial grid for electric trams and trolleys that would better serve the city at large, rather than putting all the transit funding for the next generation into only one unsustainable subway corridor.

For mayor and council candidates to answer questions

Please come and bring your neighbours!

Thank you for sending your letters and speaking to council.

Council passed the rezoning for all RS, Including WPG.
There were 302 letters and +7000 petition opposed.  73 speakers.

They rezoned all RS (single detached) to duplex, allowing up to 4 units per lot. This includes 2 strata duplex units and 2 secondary suites or 2 lock off units (with waived onsite parking requirements). There has been no public consultation process and it undermines all neighbourhood-based planning, including the WPG Community Vision that council approved in 2010.

Sign the petition to save character houses:
If you have not signed already, please sign and pass it on.
Now over 7100 and growing! Need to make this an election issue.
https://www.change.org/p/city-of-vancouver-mayor-and-council-save-vancouver-s-character-houses

Here are recent related articles in the Vancouver Sun:

May 27 WPGRA Town Hall Meeting: Thanks to MLA David Eby, the presenters, moderator, all who attended and the volunteers who made our event a success.

The Jericho Hill Gym was packed to capacity, including the upper balconies, at over 900 in attendance . With the exception of only a few people, the overwhelming opposition to this tax was clear. MLA David Eby committed to taking this message, including the proposed alternatives, back to the government and Minister of Finance, Carol James.

Most cannot afford this tax.

There are better options from the provincial tax base to cover needed revenue for schools rather than encroaching on the municipal tax base of property taxes.

The presentation by Elizabeth Murphy is here. BC Budget-Surtax-2018-Presentation

The BC Government has proposed a huge surtax onto property taxes for those assessed at over $3 million. It would substantially affect the City of Vancouver for both owners and renters, covering more properties over time.This would eventually affect everyone.

Be informed about this precedent and make your voice heard.

This is the letter sent to the province from the West Point Grey Residents Association and other information on the surtax below. 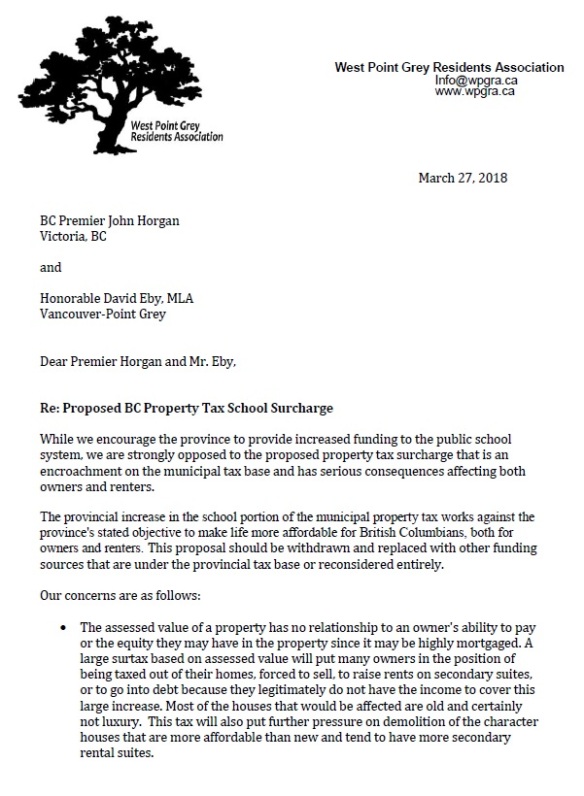 Sign the petition: Say no to new provincial surtax on property

Send letters to Premier John Horgan and the BC government:

City of Vancouver currently has the highest property taxes in Canada

BC undermines municipal tax base and affordability

Canadian Mortgage brokers Association of BC – Letter to Province

Send letters to Premier John Horgan and the BC government:

The Jericho Lands planning process is currently underway. WPGRA will be updating the community as the process unfolds. The WPGRA Survey results are submitted to the city as part of the community input. Thank you.

Redevelopment of the Jericho Lands, which are an integral part of the West Point Grey (WPG) neighbourhood, has the potential to transform the local community. A City of Vancouver planning process for both provincial and federal portions (as shown below) is expected to get underway in coming months. Consistent with the WPG Community Vision, approved by the City of Vancouver in 2010, local residents need to give early input to guide the Jericho Lands planning process. The following survey is intended to help the West Point Grey Residents Association (WPGRA) represent local perspectives. 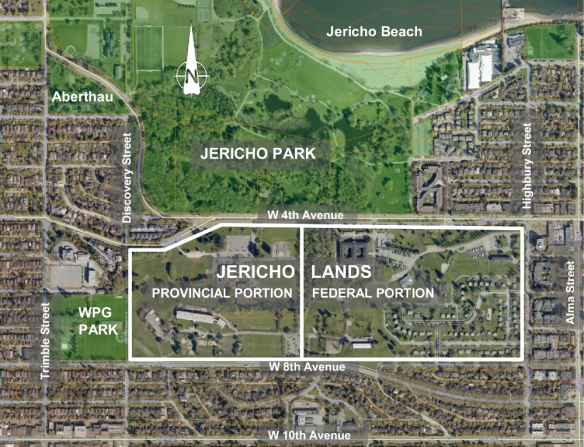 The Jericho Lands are shown outlined in white above. Both the provincial side (on the left) and the federal side (on the right) are under consideration for development planning.

Please note this is a file you can fill out on your computer. (requires Adobe Acrobat Reader)

Some browsers will display the file on your screen, but won’t let you fill it out.  If this is the case for you then:

When complete, save a copy and email it to us at info@wpgra.ca.

West Point Grey Residents Association is a non-profit society that is volunteer based. Please donate to support initiatives to engage the community. Thank you.